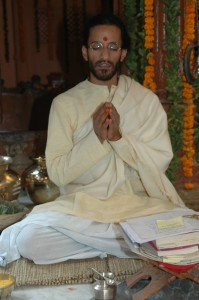 Vivek Nath – From Skateboarding to Yoga: Vivek is a German-born German Indian. He has lived for several years in an Ashram at Varanasi on the bank of the river Ganges. There his uncle, a saint of that holy city, initiated him into the spiritual science. He received Yoga instruction very early on from Sriram (Desikacar/Krshnamacarya).

Vivek has studied Sanskrit at universities in both the East and the West. His foremost Sanskrit Guru is the world renowned Sanskritist, Vagisa Sastri, with whom he has studied with regularly since 1997 in Varanasi. Vagisa initiated Vivek into the Vagyoga, the yoga of speech, as well as into Veda. Along with other specialized teachers in Veda, Philosophy (in particular Tantra), Vivek has focused on the Shaivism of Kashmir, studying from one of its world foremost authority, Dr. Mark Dyczkowski. Vivek currently teaches Seminars on Sanskrit, Mantra and Tantra, as well as performing rituals as a priest.