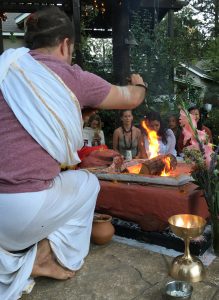 Elliot is a student of Sanskrit, Jyotish, Ayurveda and the science of Puja. He currently resides in Varanasi, India where he is studying to complete his M.A. in Vedic astronomy at Sampurnand Sanskrit University. Elliot believes in the sanctity and the power of the Sanskrit language and when studied  it’s resulting affect on mind, consciousness, and human life in general.

Background:
Elliot is from Portland Oregon. He began studying Ayurveda in 2009 at the California College of Ayurveda. He began studying traditional Vedic astrology in 2010 with Freedom Cole. Elliot started studying Vedic ritual with Virag Triphati in 2011, and traveling to India and studying in a traditional setting with him. In 2015, Elliot began University in Varanasi, India. He returns to California in the summer months to help with the classes of Veda Vyasa Center and the rituals of the Vedic Karma Center. Learn more at Elliothocker.com

Note:
Elliot can also be contacted to help with Sanskrit for Sanskrit tattoos. Sanskrit sometimes does not have a direct translation for an English term or certain concepts may have multiple translations. Tattoos stay with you for a long time. Elliot will work with you to make sure that the ‘intent’ of what you wish to tattoo onto your body has both the correct meaning, spelling and grammar in Sanskrit. He can also use Indian astrology to make sure the day of getting the tattoo has beneficial stars.